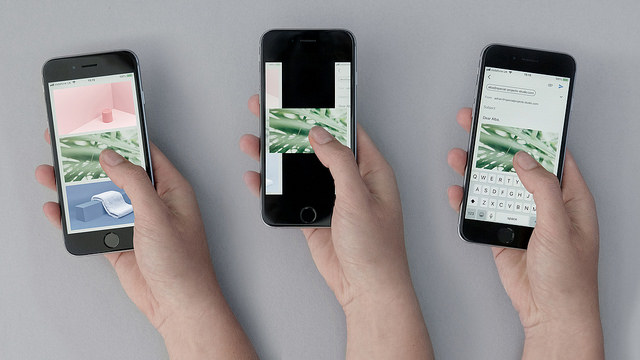 At the moment, we have two ways to interact with our communication devices: touching the screen, or using keyboard+mouse combination. A strong candidate to supplement these ways of interaction is voice. Big technology companies are investing heavily in voice recognition, and it works in simple interactions. Now,  an invention known as Magic UX takes an entirely new approach to communicating with our mobile devices.

A consultancy and design studio Special Projects in the UK has created an amazing concept Magic UX that applies augmented reality to the applications we use for our daily tasks. For instance, you are typing a message on your phone, and you want to attach a photo to the message. Now, you physically move your phone a little to the side (or up or down) where the photo gallery is located. The gallery app appears on the screen, you select a photo, and move the phone back to the point where the message app was, and drop the photo into the message.

No more cutting and pasting, or finding apps in the menu and opening them. The trick is to tell the phone that this is the place in the real world where the messaging app is located, and this is the location for the photo gallery app.

The concept is so different from anything that exists today, that it is better to take a look at a video below by Special Projects that shows how the Magic UX works:

“Magic UX totally reinvents how we use phones, and it’s brilliant. Please, someone build this for all of us!”
Jesus Diaz / Fast Company

Augmented Reality (AR) is a software technology that (often) inserts computer-generated information or images on the real world that is viewable on a screen. For instance, you stand in a street corner in a city you don’t know. Open the camera in your phone, point it to buildings at the corner, and an AR application can superimpose information about the location over the landscape the camera shows on the screen.

Magic UX is an amazing proof of creativity when innovators think outside the box. All those years when people have been trying to discover good applications for augmented reality have resulted in the Pokemon Go game. It is an excellent application that demonstrates the possibilities of the technology, but Magic UX can be really useful in real life.

Magix UX seems as a natural and intuitive way of applying augmented reality to mobile device user interface and to user interaction. Real life is another thing. First, I have to pin the applications I intend to use in specific locations against a table, wall or another object. What if I haven’t pinned an app, but I need it in the middle of a task? Will the pinned apps be there tomorrow when I return to the same place and want to use them? How do I know which apps to pin? How do I remember where I pinned them?

All these issues are part of the process of developing the concept into a software product that actually works and people can easily use on their mobile devices. Let’s hope an enterprise or investor has the courage and money to invest in this.

Ebook downloads for travelers
Electric vehicles on the road

Privacy notice: this web site uses cookies to personalise ads, to provide social media features and to enable collection of traffic statistics. Information about your use of this site is shared with social media, advertising and analytics partners.